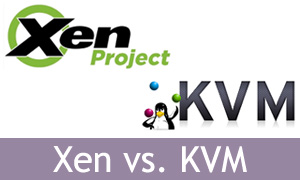 Without going into Xen vs. KVM debate, this guide will help you understand each system and decide yourself which virtualization is good for your particular requirement based on the features you were looking out of your implementation.

Xen is a micro kernel design, providing services which allow many operating systems to run on the same computer hardware.

In a comparison between Xen vs. KVM, Xen wins for six compelling reasons. These are better performance, platform support, manageability, implementation, live migration and performance benchmarks.

High performance is an added advantage in virtualization. In most performance comparisons Xen is seen to be better than KVM. Xen has better processing performance when compared to KVM.

The KVM encounters problems when more work is added to it. It has been shown to crash when it tries to support more than four guests. While Xen can support an increase in over 30 concurrent workloads.This is a massive gap between the two putting Xen at the top.

Studies claim that management is a critical factor in choosing a virtualization technology. Among the two, Xen has been shown to have broader third-party ecosystems. These ecosystems are used for back up, store management and capacity planning. They can also work in process automation, performance monitoring and other management disciplines.

Live migration is very important when routines are a must. It is also important when downtime needs tobe avoided. Downtime should be avoided because it can be costly in some situations.

Xen, unlike KVM, supports uninterrupted live migration. This is to allow balancing and routine maintenance with almost no downtime. This means that users will not be interrupted during scheduled maintenance. They may not even notice that anything is happening.

While for KVM downtime is a necessary issue that they must deal with.

With the growth of technology over the years and completion between Xen Vs KVM. More and more people are entering the field of virtualization. So, to keep up with the rising trends. Virtualization platforms must ensure that they are able to accommodate them all.

As you can see, Xen is more suitable when it comes to scalability. Since it can accommodate more virtual environments than KVM. Unfortunately, in Xen, each guest is allocated only 512 MB of RAM as compared to KVM with 1 TB of RAM per guest.

Implementation is an important thing to consider. This is so since people must be able to use the technology provided for virtualization. Xen is run and managed at a lower level.

For new virtual machine creation, guests do not share memory blocks. Neither do they share CPU instructions, unlike KVM which does. This leads to a loss in performance on the side of KVM. Other problems include latency, security, scalability, isolation, and others. These issues aren’t there in Xen hyper-visors.

Processing power and memory are both limited resources in a computer system. They should be used efficiently and not wasted.

In KVM guests share memory blocks which is not an efficient use of memory. Thus this leads to isolation, latency, and loss of scalability.

While Xen does not get affected by such issues. Sharing CPU instructions and memory blocks is not a problem. It is so because Xen supports live migration. This enables it to perform routine maintenance with little or no downtime.

Resources for each of the technologies should be made available. Xen has been around longer than KVM has. It has implementations from Citrix, Novell, Oracle and Red Hat.

There are more people available with skills in Xen and easier to get Xen training. This is very important. Since many enterprises say that they are missing essential virtualization resources and skills.

The Simmilarites between Xen & KVM

So far we have discussed the ways in which Xen is better than KVM. But we must remember that there are a few similarities between the two. These similarities are as follows.

Both KVM and Xen need hardware-assisted virtualization support. These include a different module for each operating system. Like Intel VT-x for Intel and AMD-V for AMD. These modules are Very important. This is because virtualization with the stated platforms isn’t possible without them. Some technologies like OpenVZ do not need such modules.

Both platforms will use parts of the qemu virtualization software. This is to emulate actual hardware for devices not using PV drivers.

Both are open source hypervisors which are provided for free. While other hypervisors like Hyper-V, which is provided by Microsoft is not free.

In a more detailed look at Xen vs KVM, we would also show the following:

That Xen beats KVM with virtual network support, enhanced security and high availability. It also wins in virtual storage support, power management, portability and many others. However despite the less features compare to the Xen – the KVM is still a useful platform for virtualization and many hosting providers are using it.